Karma is a you know what. Yesterday I commented on some Facebooker’s obsession with making others feel totally frantic and unprepared for Thanksgiving. I even made some snarky sarcastic mention that commissary was going to be out of butter. As if that would ever happen [insert eye roll]. The rampant threats of bare shelves were not getting under my skin, but rather I wanted to spend the better part of Saturday afternoon fighting for parking and a buggy. So off Daniel and I went to the commissary to pick up as much as we could for the big day.

Amazingly, we got all but one item on our list – the shelves were overflowing with fresh herbs and potatoes and apples. You name it, they had it – which, by the way, is not typical for an army installation. Anyway, want to take a guess at the one item we couldn’t get? Butter. They were actually out of butter!! That is, unless you are into the crumbly vegan stuff that tastes like BUTT-er. Someone seriously wanted me inconvenienced for my cynicism. Lesson learned. Speaking of inconvenience, has anyone else seen Aziz Ansari talk about his desire to impose inconveniences upon others.  Click here to see his funny spot on being single, technology, and inconveniences.

On to something even more delicious than creamy butter – pumpkin bread! Last year I made four loaves of pumpkin bread. This year I made five times that amount! Twenty loaves sounds crazy, but because licking the spatula is one of my favorite hobbies I didn’t mind having multiple batches to mix. My grandmother always reserved her incredible recipe for Christmas, but for whatever reason my sister and I now make it for Thanksgiving too.

It makes for a fun treat to share with friends and neighbors; I made my neighborly deliveries yesterday morning. My end unit neighbor received the gift and asked his only son (3 years old) if he wanted to have some for breakfast and they disappeared inside. Late last night I got a text message from his wife, who had been at work all day, thanking me for the bread – the boys had saved her a piece. Just a piece?! Sure enough the boys had dominated nearly the entire loaf in less than 8 hours. Congrats, grandma, it’s still the best on the block! Just nobody ask me for the recipe because instead of ground cloves, it’ll say rat poison. 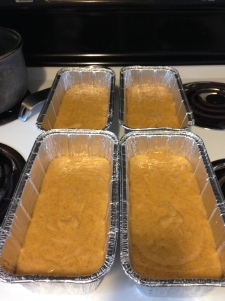 Her bread was even a hit at a barbeque we went to this evening with some new friends. Small world! On Thursday I was out walking Charlie on the beach when I noticed a guy wearing a UT baseball hat backwards. He was walking away from me, so I debated whether or not to say anything to him. Next thing I knew, I was yelling out, “ARE YOU FROM TENNESSEE?!” He wasn’t. Whomp, whomp. He’s from Austin, TX but did go to UT Knoxville where he met his girlfriend from Chattanooga.

Needless to say, we had lots to talk about; it is so nice to meet someone with a southern accent in Hawaii! Turns out they moved here two months ago and live about a mile and a half down the road from us. We exchanged information and were promptly invited to join them and their neighbors for a cook-out. Very cool! What’s even cooler is that his passion for cooking makes my dabbling look like child’s play. HE made a cucumber dill cous-cous salad, grilled pineapple salsa, homemade guacamole, and 3-day marinated flank and skirt steaks for everyone tonight. It was so nice to kick back and enjoy the delicious food without thinking about clean-up duty!

Here’s to new friends and chilly nights! It’s finally in the low 60s at night! Brrrrrrrr