Toes toes in the water,
ass in the sand,
not a worry in the word,
cold beer in my hand.

toes (almost) in the water

not a worry in the world

cold beer in my hand 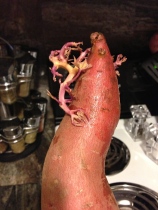 to eat or not to eat?

In the days since I last checked in with the world, Daniel and I had a Jimmy Buffet/Zac Brown tribute, several Jeep excursions, a whole macoroni casserole, a random assortment of mildly un-nutritious foods (except the cabbage salad). Speaking of unhealthy stuff – check out the sprouted sweet potato. I was totally bummed when I pulled it out of our pantry and found it was growing. I did some research and it seems the jury is split 50/50 on whether it’s okay to eat a potato that has sprouted. Sprouting potatoes are generally caused by warm, humid environments (i.e. my Hawaiian pantry,) and the sprouts indicate that the starch has converted into sugar … it could also indicate the development of a poisonous toxin called solanine. Some say it’s okay as long as the flesh is still firm, but when it gets wimpy and wrinkly, then it’s bad news. As I’ve mentioned before, I’m not much of a risk taker so I threw it away. I’d hate to think that I could have a potato growing inside of me. Daniel and I haven’t really started planning for little tots yet.

In other news, I clocked lots of hours at the gym for work (which I’m LOVING) and booked very special client! I was able to talk Daniel into being a “dummy client” on Saturday morning. At the end of our workout, he said he wanted me to train him 3 times a week. Wahoo!! Tomorrow morning is going to be our first “real” session. I hope he sleeps well tonight (:

Finally, it was a beautiful day and even though I had already logged a workout, the sun was calling me for a slow afternoon outing on the path. This view is sort of hard to resist.

Because the pictures speak for themselves, I’m off to bed. “I Have a Dream” awaiting.

Enjoy your MLK Day, especially if it’s a day off!