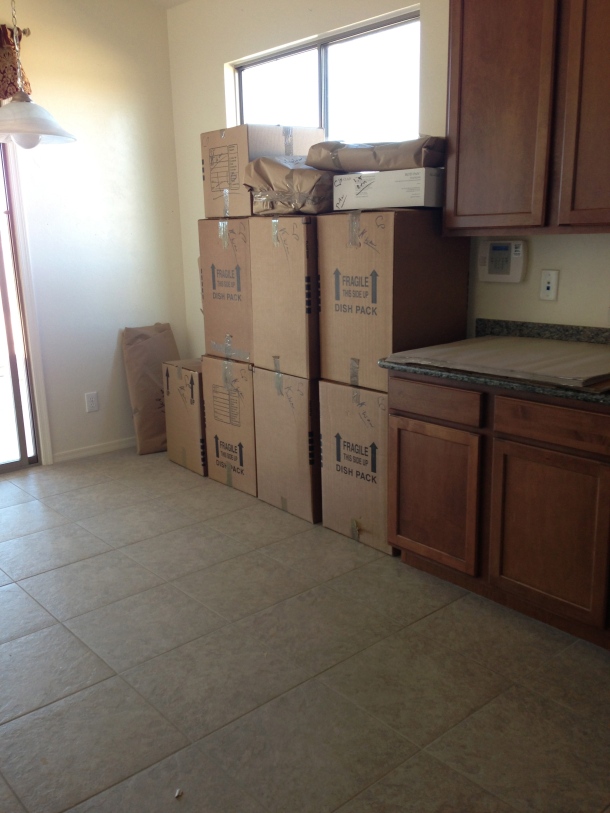 Since we don’t have a workable kitchen anymore, I didn’t make anything particularly interesting today. I did, however, boil sweet potato in a pot we reserved for our prima-donna coffee.

I have been thinking a lot lately about doing a post dedicated entirely to steak’s better half – the potato. I want to explore the differences between sweet potatoes and yams, for example, and also the benefits of switching from Idaho style potatoes to, say, purple tots. But that’s for another night. Tonight is all about the sauce.

For a plate, I went with a recycled brownie tin that was previously housing macaroni and cheese, which Daniel polished off (you’ll notice I didn’t bother washing it). 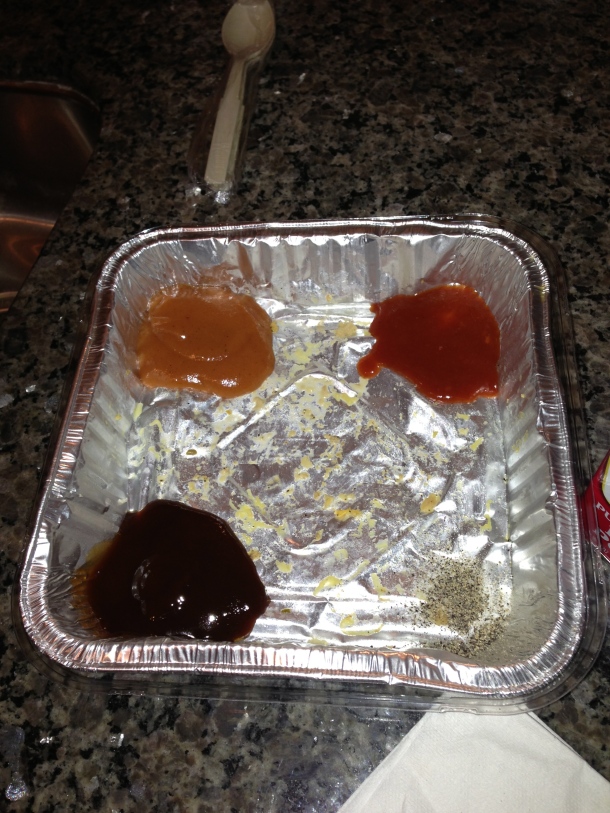 Breaking News: I am a condiment-a-holic. Tonight I did a sweet potato taste test with carolina BBQ sauce (upper left), regular BBQ sauce (lower left), and taco sauce (upper right). Yes, I dip – well, more like dunk – my taters in just about anything but the normal brown sugar, butter, and marshmallows. Don’t get me wrong, I do LOVE marshmallows; however, I believe they command more respect and consideration than as measly topping. Heck, they could be a whole meal in my book. I like marshmallows so much so that I am on a waiting list on candywarehouse.com for a very particular type of mallow that is currently out of stock.

Back to the taste test. Which sauce reined supreme? Traditional BBQ sauce.

Carolina BBQ sauce is delicious but had to be eliminated because of it’s color. It simply doesn’t compliment the sweet potato’s vibrant orange interior … in fact, it looks a lot like me in beige – totally washed out. Eating, in my opinion, is a very aesthetic experience. If it doesn’t look good, why would we expect it to taste any better? The taco sauce wasn’t bad. Nor was it impressive. Mostly, I just wanted to finish off the bottle so it was probably doomed from the start. The traditional BBQ sauce won due to it’s distinctive spicy worcestershire pop of flavor and it’s nice maroon-ish red color against the potato. Very easy on the eyes, and palate!

Onto dessert. Daniel wasn’t into my potato dipping contest so he opted for Wendy’s. As he was leaving, he asked if I wanted a frosty. Of course! He proceeded to ask sweetly, “what flavor and what size?” to which I replied as plainly as I know how, “vanilla and medium.” (I was elated with Wendy’s wised up and introduced the vanilla flavored Frosty.) He came home 20 minutes later with two medium chocolate frosty’s because he didn’t think I liked vanilla. He must’ve had double-cheese burger on the brain when he asked me. 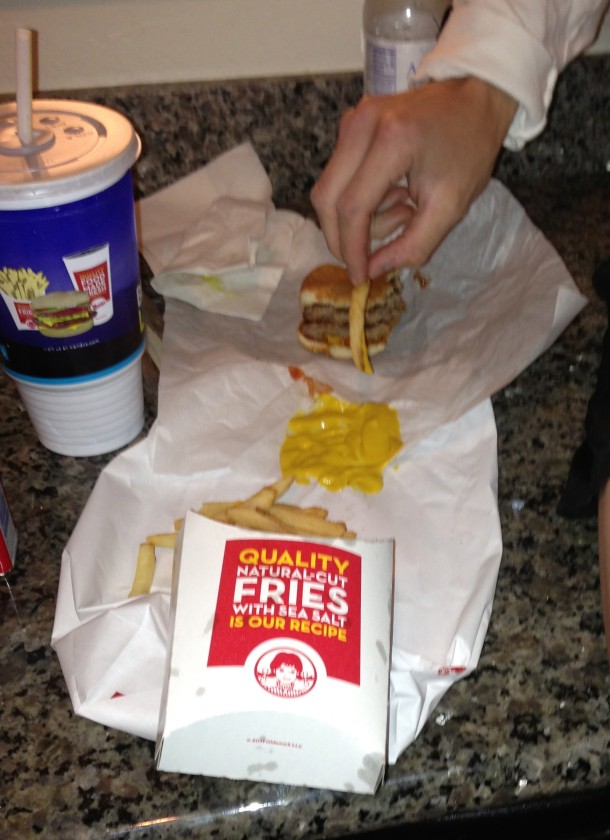 We were also stripped of our tv and all seating today. The only place left to sit was the bed so we spent the night under the covers, watching House Hunters online and drinking wine … straight out of the bottle. How romantic. 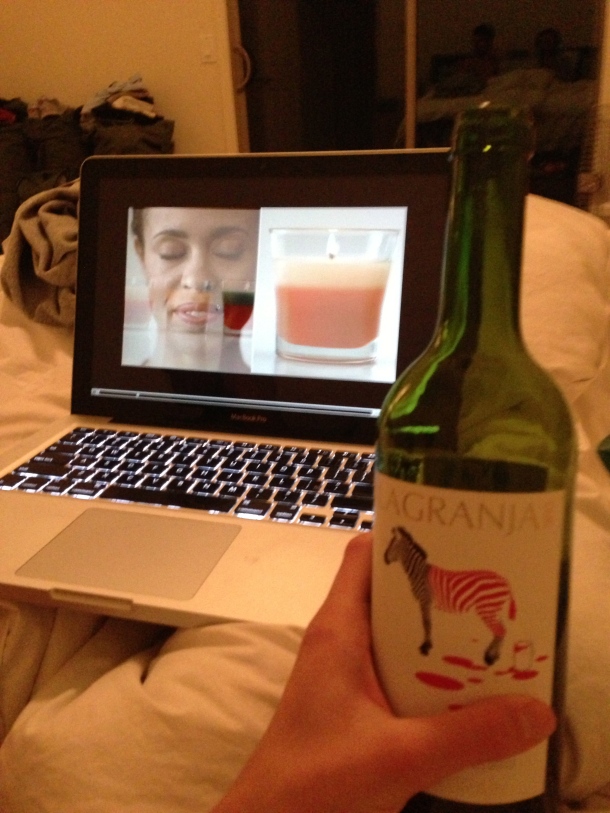 Weird commercial break. I swear it was House Hunters we were watching.

One thought on “condiment taste test” 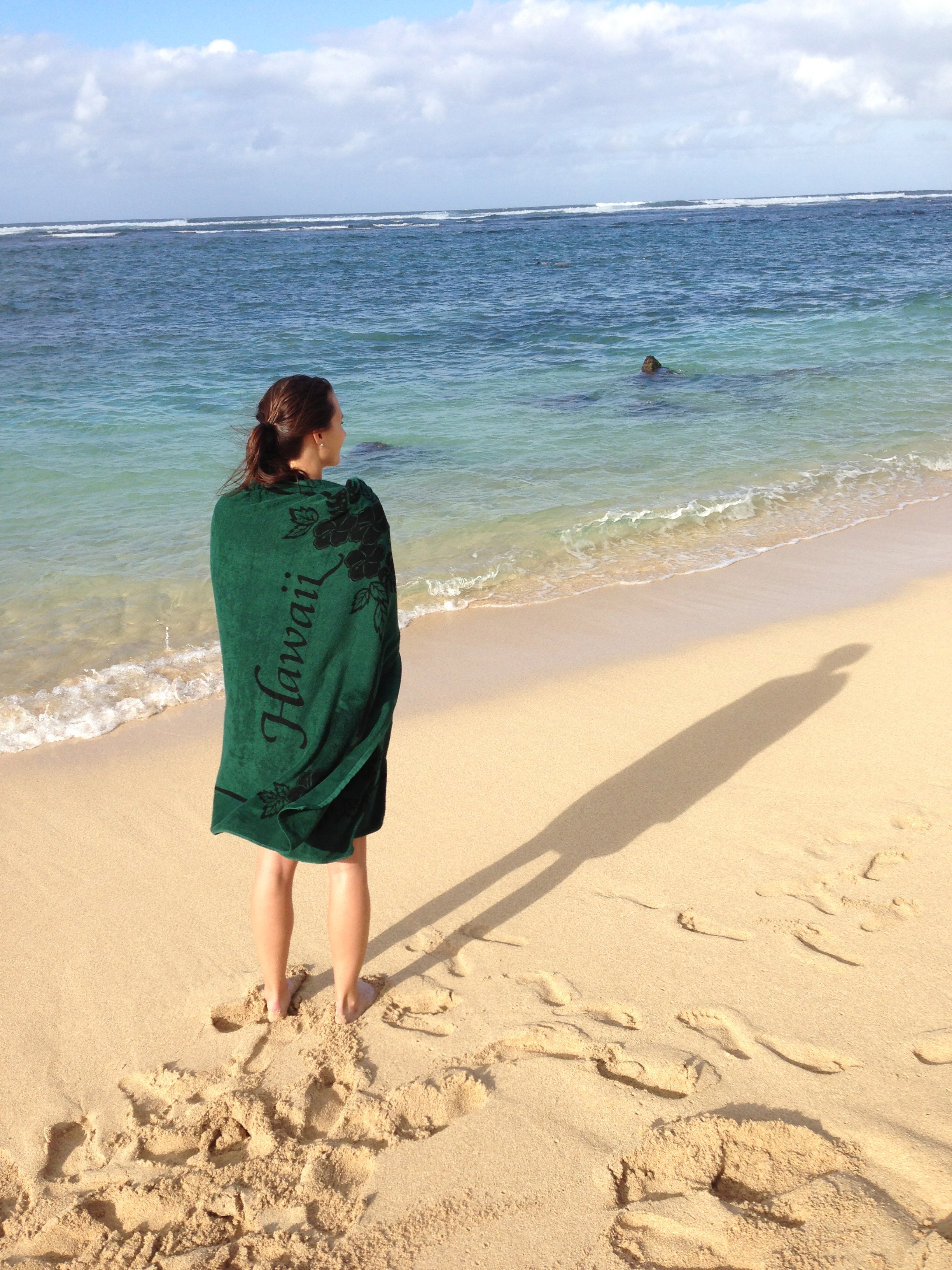