Whelp, I’m wiped. Our Saturday got started relatively early. We had to get up for a seven o’clock Hoosier tip off! Indiana ran circles around Minnesota while the #1 ranked Duke lost to #20, NC State. Wahoo! During halftime, we took Charlie boy back to the beach for a morning swim. He is the best pup on the planet. 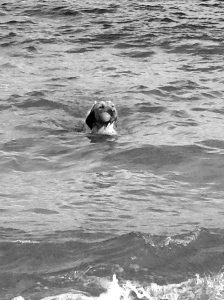 this is the life

By nine thirty we were back to working on the house. I didn’t sit down (except to drive to the store for storage bins) until nine o’clock tonight. We made a lot of progress, however to look at the place it still looks like we let Charlie do the cleaning. That’s because the better part of today was spent going through large file boxes sorting the trash from the shred from the re-file. This is definitely the “gets worse” before the “get’s better” part.

We even had intentions of taking a break to go to the gym. Hah, we didn’t even come close. At eight o’clock tonight I was aching from bending over the file cabinet and itching for some real movement. My options for exercise were a night run, or a night run. I opted for a night run. I don’t know why, but I always run harder and faster in the dark. Well, maybe it’s because I am mildly afraid of the dark. It is invigorating though! Running at night is just about all the “living on the edge” I can handle. That’s not saying much since this town is so peaceful that the biggest safety threat is tripping on over my own feet, and it’s not that dark since the path runs parallel to the main road. Even still, for extra precaution, I wear a reflective belt and carry pepper spray (just in case I come across a stray dog.) So much for living on the edge …

see, I told you it was peaceful

Even though my ‘peace pace’ was up-tempo tonight, I still made time to enjoy a brilliantly starry sky and some love from a sweet lab named Lola.

Nothing remarkable to report from the kitchen today. We just whipped up a quick pizza from the leftover pasta meat sauce, some basil and fontina cheese. Easy cheesy.