First of all – Happy Birthday Jesus!

We kicked off his birthday celebration with a Christmas Eve children’s Mass at our home parish. Chaos as usual but a very sweet homily for the kids. Church was followed by a late dinner of bbq chicken, mac&cheese, broccoli, and white russians. Also because it’s the season to indulge, our neighbor who is originally from Texas made us her famous homemade tamales so of course we added those to our meal! 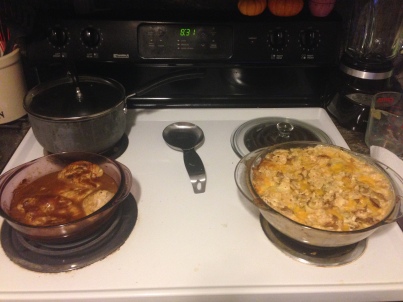 that’s a lot of yellow

Our other neighbor gave us this beautiful homemade beach-wood cross. It’s just perfect!! 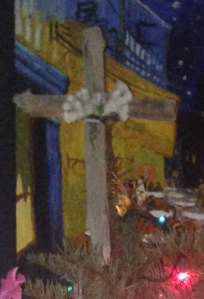 Since dinner was late, there wasn’t much time to finish the last bit of wrapping before getting tucked into bed so Santa could come. After both stockings were hidden, we were ready for visions of sugar plums to dance in our heads.

Fast forward 7 hours. Upholding the Christmas morning tradition, our day began with a difficult stocking hunt. Mrs. Clause really outdid herself this year. Daniel searched high and low for roughly an hour. To his credit, he wouldn’t accept any hints, and he finally laid his eyes on the prize, hidden deep within the Christmas tree.

not in the pantry

not under the tree

not behind the mattress

definitely not in the linen closet

Finally! IN the tree!

Though Santa also found a good spot for mine, I can sniff out presents anywhere!

Charlie’s stocking was pretty obvious but has been hanging out of reach from the poor guy for 5 days now. He’s been very patient. He got a Kooky Chicken and a bone from Daniel’s family, and we got him a Duck Dynasty (hold the controversy says Charlie!) duck, a new sleeve of tennis balls, and the biggest bone we could find – which happened to be disappointingly small. I think he made out okay this year though!

getting excited for Christmas!

By the time we had opened stockings and experienced a short fashion show, we were famished. Nothing some blueberry pancakes and egg nog couldn’t fix. 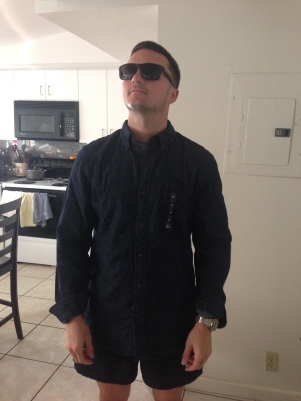 Santa also brought us each a hydroflask, how did he know!? They are gauranteed to keep ice cubes frozen inside a scorching hot car for 48 hours [with no condensation], and hot coffee piping for 12-24 hours. Can’t wait to test these claims out!

Post pancake feast, we got to Facetime with Daniel’s family while we opened the bajillion presents they sent us. Thank you!! We then attempted to Facetime my family, but we all about smashed our phones trying to get a good enough connection. 😦 Dang. Anyhow, as usual, we were spoiled by them too. We feeling very blessed!

Daniel, Charlie, and I finished up gifts to each other around one o’clock which left plenty of time for a short 4 mile jog before Daniel started making Christmas dinner. Yep, you read that correctly. Daniel was the master chef today, while I played the role of sous chef. He made an amazing feast and may have even started a new meal tradition.

He chose Pioneer Woman, Ree Drummond’s pot roast recipe with a few modifications. He added whole mushrooms, parnsips, dried thyme, dried rosemary, and a few sprigs of sage just because it was the only fresh herb we had on hand. 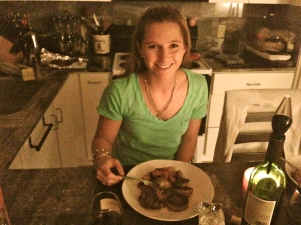 Oh my gosh! As I just am looking back at the pictures of the delicious meal, I am realizing that the only portion of the meal for which I was wholly responsible was steaming the broccoli. I put it in the microwave at the last minute and it is still in there – in the time it took to load a plate up with pot roast, I completely forgot about it!! Needless to say, we didn’t have anything green with dinner … but we obviously didn’t miss it. Whoops. I better go get that before I lose my marbles again.

Finally, we cozied up on the couch with a glass of Washington Cabernet and reflected on the awesome day while listening to Christmas music!

because wine gets cold too…

We hoped you had a very special Christmas too!! ….and to all a good night!